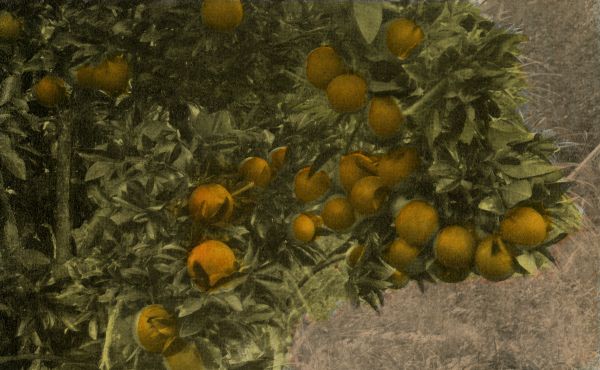 A Resident Who Objects to Any Implied Reflections on Florida

He Holds His State Fully Equal to the “Glorious Climate of California.”

Admitting There Are Some “Tired” People There, the Majority Are Very Industrious.

To the Editor of The Inter Ocean.

KE-U-KA, FLa., May 18. – I have no time to write for the press, and am only driven to it now by a letter which appeared in THE INTER OCEAN recently from a correspondent in California. The objectionable portion of his letter is the following comparison: “The advantage of California over Florida is, the people of the former State do not lose any of their life, activity, or energy as they do who take up their homes in Florida.” This information must be valuable, as it comes from a person who has sojourned three whole weeks in the land he applauds, and no time or word shows that he had for a moment enjoyed what the most celebrated medical men in the world have repeatedly asserted and declared the most delightful climate in the universe.

I would shrink from anything that might undervalue the El Dorado State, for it has many blessings for the human family whose lot has cast them on its genial shores, but with equal pleasure I rise up before THE INTER OCEAN audience and deny – emphatically deny – that a residence in Florida robs a soul of the life, spirit, activity, or energy he inherited.

THE WRITER OF THIS HUMBLE DEFENSE has worked up fifty-four winters and has just started in on his fifty-fifth summer. He was brought up in a printing-office and editorial-room, and never worked outdoors a day in his life except on fishing excursions before coming to this State, yet last summer he worked every week day in his grove. Two years and a half ago the writer called to bid the editor of THE INTER OCEAN good-by. You will remember you said, with a wee bit of sarcasm in the northeast corner of your eye, “Florida is a magnificent lazy man’s country.” The writer agreed with you, as it was an expression universally used in the North; but he has never worked so hard in his life, nor is he the only one who works. This settlement, which is located nineteen miles west of Palatka on the Florida Southern Railway, is made up of people from Illinois, Ohio, Indiana, Iowa, and Connecticut; and they all work, men, women, and children, building houses, making fences, cutting timber, setting out groves, cultivating flower, fruit, and vegetable gardens. They work as many hours and many more days than in the North. As an evidence of the mildness of our winters, one could pick ripe tomatoes on my place any day from November to date. So you see that the climate is in favour of your working every day in the year. 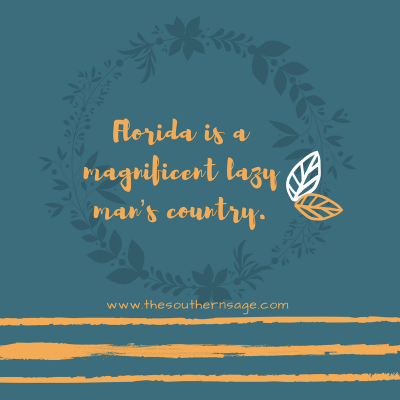 NOR ARE THE PEOPLE OF FLORIDA, the natives and long residenters, lifeless, lazy, or inactive. Of course there are people born tired in Florida as well as in Illinois, but the per cent is no larger.

As an illustration of the spirit and energy of the people, look at the city of Palatka. The sun went down on the night of the 7th of November, as was his custom. The bright red orb lit up one of the handsomest cities in the South, if not in the Union. The morning sun of the 8th rose on its ashes. Her immense hotels, with reputations co-extensive with the world; her large mercantile establishments, filled with the necessities and luxuries of life; her banks, her post-office, and the magnificent orange trees that lines her business streets had vanished into thin air. The morning was a chilly one, and the tired and begrimed citizen, who had through the long night fought the fire fiend, stood face to face with misfortune. It was a short acquaintance, quickly shook, for ere the sun went down the music of the saw and hammer was heard in every direction, and on the 7th of May, five months from the day of disaster, the city was nearly rebuilt. Forty-one stores, the buildings two and three stories high, built of brick and finished with plate glass and costly fixtures, wrought from our native woods, stand on the burnt district.

THIS DOES NOT INCLUDE the warehouse built of iron and a hundred wooden houses erected beyond the fire limits. What does this read like, as though the people became lifeless, inactive, or lazy by a residence in Florida. To my mind it displays activity, energy, and pluck, when compared to wealth and population, superior to Chicago or any other city in the world.

Three years ago when the Florida Southern Railway started westward from Palatka, it was twenty-five miles to the first house, now all along the line can be found prosperous villages, handsome houses, and charming groves and gardens.

Florida is a wilderness country. There is no mistake about that. It is the reverse of Illinois. In 1856 the writer located in Central Illinois. He rode all day looking on and over a broad expanse of treeless prairie. “A land, unbroken save by undulations as graceful as the waves of a peaceful ocean,” said some one – think it must have been “Siva.” One can ride all day in Florida amid stately pines, magnificent oaks, and fragrant magnolias. Look where you will, ride where you may, you are surrounded by a forest “unbroken save by clear lakes and as occasional orange grove.” It is to some a delightful land. 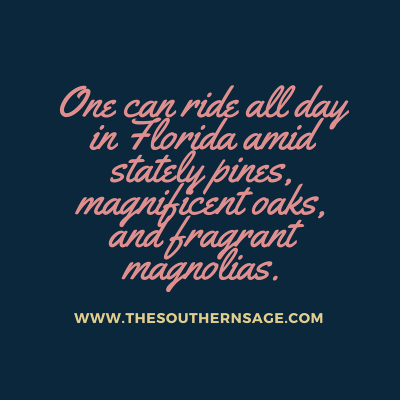 THEY SEE BEAUTY IN THE TREES, romance in the lakes and rivers, and comfort and enjoyment under the vine and fig tree. To others it is an abomination. It is too woody, too wild, too weird, too sandy, too hot, too wet, and last, that should have been first, too far from mother. The first class has industry and patience, the latter can not adapt themselves to circumstances, and are usually born tired. When we hear of a man talking of coming to Florida, yet is fearful that the climate will cause him to lose his activity, the community will have a brief season of prayer. Shortly afterward we hear of him in some other State, and publishing senseless verbiage about men losing their activity by taking up their residence in Florida. It seems to be natural for some persons emigrating to a new country to set down while the wife is getting the first meal to write to the home paper of the beauties and advantages of the newly found paradise. In most cases this is done because the emigrant feels lonely, sometimes done because he has an interest in that section and expects to increase the size of his bank account. After a residence of two years and a half I would hesitate to advise any one to come to Florida for the purpose of

MAKING IT A PERMANENT HOME until he first visits this land and examines thoroughly its climate, soil, products, manners, and customs of the people and the possibilities of securing a livelihood. Those who are troubled with rheumatism, catarrh, hay-fever, neuralgia, diphtheria, and throat and lung diseases can afford to make the change. But the man who has a large family dependent on him should move slowly and hesitate to go into any new country until he is satisfied that it is for the best.

Florida is full of inducements for energetic men as well as for men of means, especially to the class who prefer four months spring and eight months summer to eight months winter and four months summer. Some portions of the State have never been trod by the foot of the white man, but it will be. Railroads are being built in every direction. The slashes, the prairies, the rolling pines, and the hammocks will soon be pierced by the iron horse, and every section of the State will become accessible to the tourist and emigrant. This county, Putnam, has doubled in population in three years and double in assessed values in two years. Taxes last year was $1.40 on $100.

THE PRINCIPAL PRODUCT IN THIS COUNTY is the orange. According to the last United States census Putnam Country raised one-seventh of all the oranges in the State, and notwithstanding the low price of the past winter, a grove in bearing is a fortune. A full-bearing grove will yield from 300 to 500 boxes. At a dollar a box he can make both ends meet, especially when he is not compelled to spend any money for overcoats, mitts, and firewood. 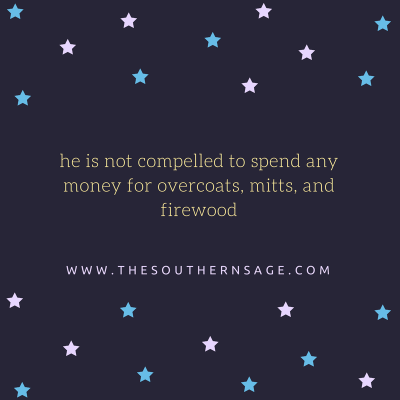 Spears’ grove gave forth last year $9,000 and over, and this year $10,000. It contains six acres, but it is a very old grove. Hart’s grove does much better; last season it went $18,000. This one is opposite Palatka and is visited by thousands annually. Bishopp owns sixty acres in bearing, Harris 100, and there are others equally fortunate. We don’t know what they do with their money.

It is not an easy thing to make a grove. The land has to be cleared, fenced, plowed, and the orange trees set. The cost for this selecting average land, is about $125 per acre. If budded trees are used they will bear some the second year, and the fifth year sometimes pays the whole expenses. To do this, however, thrifty trees must be secured and kept growing by judicious cultivation. Mr. Boyd, of this county, came to this State nine years ago. He walked all the way from his home in Kentucky.

HE HAD CAUGHT THE ORANGE FEVER and came to seek his fortune. He says that if on his arrival whole counties were selling for a dollar a dozen he could not buy ten acres. But the spirit was born in him and he soon found work at 50 cents per day and board himself. As he had no other boarders the bill of fare was seldom changed; it consisted of Indial meal, salt, and water, the latter being cheapest; the two former were adulterated. By thus thinning his expenses he was enabled to pay for a small piece of land in two years. He then commenced to set out his young orange trees and seed, and now he has one of the finest young groves in the State. He has taken care of his grove and it will take care of him, as it places him in a position to enjoy the balance of his life in independence. Another friend picked up the seeds about the hotel that made the trees in his grove, and last year he shipped over 500,000 oranges. These two are not the only illustrations of life, activity, and industry in Florida. There are hundreds of them. All or nearly all of the wealthy orange-growers in the State came here poor, and had similar experiences to Mr. Boyd’s. There are other products besides the orange which promises to be profitable, Irish potatoes and all kinds of truck farming being in “big” pay. But it was not my intention to give the possibilities of Florida when I commenced to write this letter. TO do that would encroach too much upon your space, and am not satisfied that it would be agreeable to you and your readers. 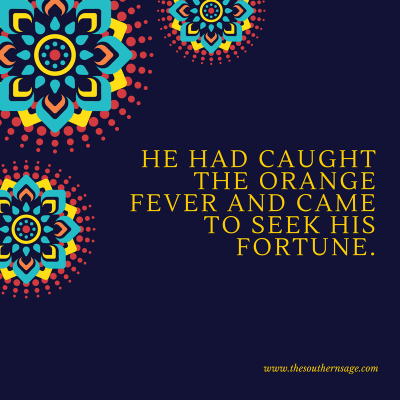 I have taken THE INTER OCEAN since its first issue. We receive it here the second day after its date, and it is more highly prized than when we got it red hot for breakfast. 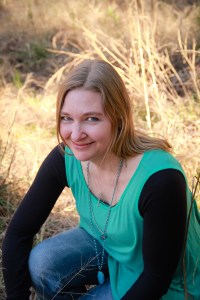 Marsanne Petty conducts historical research about 18th century southern United States and environmental history. To get more great updates and original history, sign up at The Southern Sage. To get her to help you with your own research project, email mapetty[at]gmail.com.